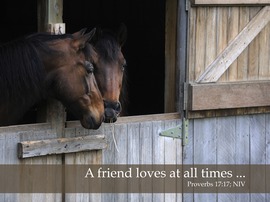 In my life, I have been blessed with friends who stuck with me through thick and thin. They provided words of encouragement when needed and rebuked me when I did something wrong. In short, no matter what happened they were there for me.

The test of true friendship is being able to reach out to a friend and ask him or her for help and knowing that he or she would help without even thinking about it. I have had several instances in my life where I have been the recipient of true friendship and have done the same for my friends.

As we are about to celebrate Thanksgiving, we should think about the native Americans who helped the Pilgrims through their tough times. They showed them how and when to plant and how to survive the harsh winters. Without their help, there would be no American colonies or Founding Fathers. They truly were and continue to be a blessing to America.

Just like the Pilgrims and native Americans, we are friends to everyone and brothers and sisters in adversity. We help where we can and there are no strangers to us. When I went to vote on Tuesday, a car was backing out of a parking space. The line of people broke up to let the car out and when the line formed, a group of people moved in front of me. They felt bad about cutting, but it turned out that it was the best thing that could have happened. We began to talk and shared our lives while we were waiting. This how a friendship starts.

Even at an airport, people share and take care of one another. I have seen that happen countless numbers of time. When there is a flight delay, we share a problem and each works to help others get through it. It always amazes me to watch total strangers bond together and become friends.

As we look at the third kernel on our plate, let us give thanks for the blessing of friends and friendship.

A friend is always loyal, and a brother is born to help in time of need. Proverbs 17:17 (NLT)