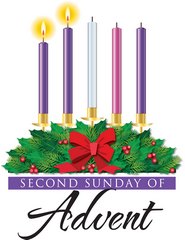 The Gospel reading for the Second Sunday of Advent comes from John 2:1-11.

2 The next day there was a wedding celebration in the village of Cana in Galilee. Jesus’ mother was there, 2 and Jesus and his disciples were also invited to the celebration. 3 The wine supply ran out during the festivities, so Jesus’ mother told him, “They have no more wine.”

4 “Dear woman, that’s not our problem,” Jesus replied. “My time has not yet come.”

5 But his mother told the servants, “Do whatever he tells you.”

6 Standing nearby were six stone water jars, used for Jewish ceremonial washing. Each could hold twenty to thirty gallons. 7 Jesus told the servants, “Fill the jars with water.” When the jars had been filled, 8 he said, “Now dip some out, and take it to the master of ceremonies.” So the servants followed his instructions.

9 When the master of ceremonies tasted the water that was now wine, not knowing where it had come from (though, of course, the servants knew), he called the bridegroom over. 10 “A host always serves the best wine first,” he said. “Then, when everyone has had a lot to drink, he brings out the less expensive wine. But you have kept the best until now!”

11 This miraculous sign at Cana in Galilee was the first time Jesus revealed his glory. And his disciples believed in him.